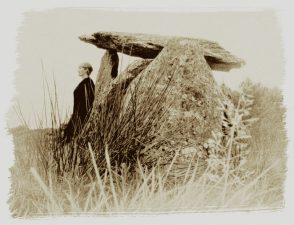 Over the past ten years Patricia Pyne has established a reputation as a stylish and creative photographer. Best known for her evocative interpretation of the natural world and for her striking images of the stone circles, dolmens, ring forts and sacred sites of Ireland, her work also features a variety of photographic subjects including portraits and landscapes.

An honours graduate of Queen’s University Belfast in Medieval and Modern Languages, Patricia pursued a career as Head of Languages at Victoria College Belfast and later Tutor in the Graduate School of Education at Queen’s. A longstanding interest in art and, in particular, photography as an artistic medium led her to take up photography as a personal adventure. She trained at the Belfast Metropolitan College, gaining top honours and first place in the UK in Advanced Art and Design (Photography). Bringing to her work a European dimension and a multiplicity of skills and talents, she was awarded the distinction of Associate of the Royal Photographic Society. This marked the beginning of what would quickly become an all-encompassing commitment to the art of photography.

She recalls a visit during her formative years to the famous palaeolithic caves at Lascaux in France, now closed to the public: ‘It was an experience that later shaped my photography. I was captivated by the magic of these shadowy caves with their magnificent cavalcades of galloping bulls, equines and stags. The startling aspect of the paintings was that, despite their great antiquity, they showed that creativity and expression have remained remarkably similar across thousands of years. I felt that images evoking the past could be a distinctive and pleasing style. When I create my natural history pictures, for instance my photographic studies of animals in motion, I always have Lascaux in mind.’

In 2005, inspired by the work of the early Irish photographer Robert Welch, she started to explore the scenery and antiquities of Ireland, especially the megalithic landscapes, many unknown or almost forgotten except by those who live nearby. As a photographer she was drawn to the wonderfully sculptural portal tombs that became the main focus of her acclaimed Megaliths exhibition. Speaking at the opening in the Linen Hall Library Belfast, she said: ‘They are magnificent monuments and have everything I love about our prehistoric heritage. Hidden in valleys or on lonely hillsides, set against stunning backdrops or rising clear above the Irish countryside, they are ancient symbols of spiritualism, luring the viewer into a mysterious and primitive world. I like to think that, through my photography, viewers can see places that lie outside their personal experience. My pictures rarely include people. I prefer to photograph traces of what is left behind and allow viewers to respond in personal and imaginative ways.’

In 2014 Down County Museum commissioned a selection of early Christian and medieval sites in County Down. The results are displayed in a dramatic and thought-provoking exhibition that captures the hidden beauty of our ecclesiastical heritage. High crosses, round towers and ancient churches stand out dramatically against subdued backgrounds, recalling the pale flat skies and dark, delineated forms of early albumen prints, others pay homage to the salt print’s soft interplay of light and shade. Whilst her distinctive style and beautifully printed images in warm sepia tones may be rooted in the pictorialist tradition of the 19th century with its search for beauty, mystery and atmosphere, they also reveal a fresh and modern sensibility.

Patricia’s work has been the subject of several successful solo exhibitions.  Her recent body of work, a literary and visual interpretation of the diaries of Ireland’s earliest and most eminent naturalist John Templeton (1766-1825), aroused great public interest when it was shown in 2016 in the Ulster Museum, Belfast.

A traveller, writer and committed gallery visitor, Patricia has an extensive knowledge of the history of photography and an understanding of its place in modern visual culture. She plays a key role in the promotion and exploration of photography as an art form and has gained wide recognition for her work, receiving commissions from private individuals, businesses and public bodies. Her pictures have been exhibited to critical acclaim and can to be found in private and public collections at home and abroad.